Let me start by giving you a little personal history.  I have been a shooter since early childhood.  My grandfather taught me to shoot when I was eight years-old and I have been a dedicated sport shooter ever since.  I shot my way onto a Policemens' Benevolent Association team when I was ten and that was the beginning of my competitive career.  In the decades since that time I have been on numerous rifle-teams, including the First U.S. Army team at Ft. Dix, where I won the post small-bore championship in 1965.  After the army, I tried out for the Penn State varsity rifle team and won a spot on it.  We beat both Army and Navy that year...but got our asses kicked by the mountain boys of West Virginia.

In subsequent years I have competed in handgun, shotgun and rifle events, won three state championships, and put countless rounds downrange just for the fun of it.  You would have to look hard to find a more devoted shooter than I am.  But, recently I decided to not renew my membership in the NRA, and I have been a member since childhood.  My reason for making this decision is that I finally got to the point where the rhetoric coming from the NRA leadership began to sound just plain stupid.  That's it.  I finally could not stand the rigid unwillingness to support even common sense measures to keep guns out of the hands of people who should not have them.  Enough is enough.  How much more mayhem has to happen before the whacko far right realizes that living in a country where even mental cases can go out and buy a gun...is simply undoable, unacceptable and STUPID?

No background checks at gun shows?  Not on internet or private sales?  What are you really doing when you create such easy access to essentially unlimited firepower?  What is the ultimate message here?

Then there is the fact that the list of speakers at the last NRA convention was a laundry list of far-right whack-jobs: Palin, Beck, Perry, etc. etc.  I can't stand the bullshit that pours forth from ANY of these people and now the NRA considers them 'keynote' figures.  Well, that was really the straw that did it for me.  I couldn't imagine going to such a meeting and being surrounded by people who admire Glenn Beck...or Sarah Palin.  I need to be around people who don't lie at the drop of a hat, who believe that an intelligent public discourse is necessary to the well-being of our democracy.

So, bye-bye NRA.  I admired your ideals for decades, still believe that the right to keep and bear arms is our best insurance against the rise of a despotic government....but, I also know that there are far too many people now who should be denied that right....lest they run loose among us sowing destruction and death.  We take great pains to keep drunks from killing us on the roads...now it's time to start identifying the mentally unstable and the socially malevolent and preventing them from arming themselves.
Posted by Murad Sayen at 2:54 PM No comments:

Here is a link to a piece of reportage on CNN.  If you are not willing to be disturbed or upset....you may want to avoid opening it.  It is about how human beings are treating the animals who have been our partners in life and our friends unto death...by torturing, killing and eating them.
http://www.cnn.com/2013/06/02/world/asia/thailand-dogs/index.html?hpt=hp_t3

I came across this story within a few minutes of seeing a photograph of a dog resting his paw on a policeman's coffin. The cop was killed in the line of duty, shot by a felon, and it was clear that his K-9 partner keenly felt the loss.  The grand irony of the juxtaposition of these two stories hit me like a freight-train.  Dogs have been with us since we were hunter-gatherers, wearing animal skins and hunting down our food or starving.  The original dogs were wolves that researchers now believe had a special gene that made them inclined to bond with humans.  They were pre-disposed to being more tame than their fellow wolves and this enabled them to strike up a partnership.  Their senses and hunting ability is so much better than ours, but our killing ability is accordingly so much more efficient than theirs--via weapons and guile--that it was a match that proved to be symbiotic.

On balance, it remains unclear who got the best deal.  We lavish care and love on our dogs, yes.  There are a host of folks, like my wife and me, who treat their dogs like they were our children, and we're not at all embarrassed to use that comparison.  On the other hand, millions and millions of them fall through the cracks and become so much excess baggage that we euphemistically 'put down'.  We kill them because they are unwanted.  Then there is the above canine holocaust. This is treatment so devoid of any compassion, so bereft of any sense of humanity that it becomes a living enactment of hell on earth.  The dogs are purposefully tortured, skinned alive even....in front of the other dogs--who clearly know what is happening and therefore what is about to happen to them.  This terrorizing is intended to render dog meat that is more tasty due to being infused with maximum amounts of adrenalin.  There are people who choose to make a living doing this, and people who choose to eat the product of this horrific undertaking.

This is another milestone that is, for me, more laden with import than the recently noted passing of the 400 parts per million of CO2 in our atmosphere, which level has not been in place for at least 3 million years, possibly as long as five million.  The conventional wisdom around that was that we have passed the point beyond which massive and catastrophic climate change is now inevitable. But, for me, this treatment of animals--the very ones who befriended us all those millennia ago, and made our survival at least easier if not possible--in such an intentionally cruel, heartless and self-interested manner....is telling us that we have also sunk to a sub-human level of behavior.

When you get right down to it, it is only our compassion that makes us human in the end....if we are to infer that the very term 'human' implies something nobler and more worthy than the beasts upon the plains of Africa, where we first stood upright and began separating ourselves by our ability to rise above and to become somehow special, 'better'.

Well, now you know that our noble aspirations and our vainglorious pretensions that we are the 'Blessed Ones' are just so much bullshit.  We are demonstrating to ourselves..and to the entire population of sentient beings on this planet, that we're the ones who are truly capable of creating a living hell our of what might otherwise be The Garden of Eden. 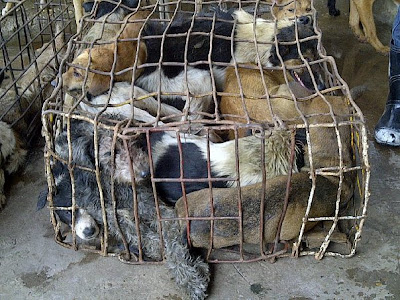 Posted by Murad Sayen at 4:31 PM No comments: