A Letter to My Descendants 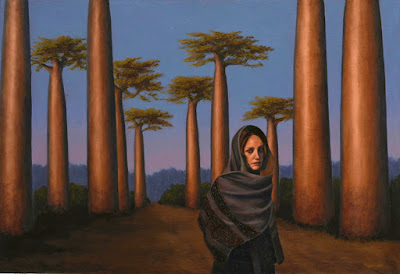 This is intended for my descendants....should there be any....five generations from now.  Of course, there is no way to know if there will be such people, but on the outside chance that you do exist, I am writing to let you know some things from our perspective here in the early 21st century that I am hoping will be helpful to you.

First of all, I believe my generation, and myself, in particular...owes you an apology.  Are you surprised?  Perhaps you have wondered if we knew how badly we were treating our blue jewel of a planet, and if we realized that it would have such catastrophic results.

Short answer:  yes we did.  At least, a majority of us did. And, we pretty much stood by and let the oligarchs have sway and make a host of terrible decisions, most of them driven, pure and simple, by GREED.  They felt it was our planet to do with what we wanted, even if that meant being destructive and intentionally unaware of what that would mean down the road.

For those of us who stood by and watched in horror as the planet was raped and plundered, there can be no excuse.  We saw with our own eyes what was happening as it unfolded......and we did far too little and too late.  Somehow, we couldn't really grasp that it was as bad as it was, or that it would lead to even worse.  We were, as our expression goes....like that river in Egypt, the Nile.  Denial is a powerful cop-out.  It enabled us to shrug and constantly repeat to ourselves, "Nothing I can do about it."  And, for what it's worth, by the time we realized that we COULD do something, it was mostly way too late. It's like putting out a house-fire: if you catch it early, it's easy.  If you don't, it's impossible.

You might be wondering if we felt badly about the insoluble mess we would be leaving for 'future generations'.  I can only speak for myself and my wife, Abigail: yes.  We felt sick about it, and we were fully aware that it was quite likely that your generations could end-up living inside a hellish nightmare, if you survived at all.

But, somehow, that was never enough to make us take the dramatic steps....even violent revolution in the end....that would have been required to change the heading our ship was on, and avoid going on the rocks.  The entire process of slow and then faster degradation was imbued with a feeling of inevitability.  We were not merely passive.....our passivity was driven by copious amounts of APATHY.  Because so many people believed there was nothing to be done...that the ship was essentially unsteerable....it just became more and more possible to accept the unacceptable.

Perhaps you are wondering if we were weak and cowardly.  Fair answer:  in hindsight, it appears that, yes, a lack of courage and determination was a part of what determined how we reacted to this greatest threat to humanity and all sentient creatures.  It feels tragic, abysmally sad, that this was what we chose to do, all the while mumbling to ourselves that we were helpless.

No, we were NOT HELPLESS.  We just told ourselves that we were to let ourselves off the hook. From your perspective, perhaps it's easier to see how it all came about.  The fatal flaw--if one can pin-point a single leak that really sank our ship, when there were many--was the all too human trait of GREED.

Of course you must be familiar with it.  It's what happens when humans begin to believe that we are all just out for ourselves, and the struggle is to get as much of anything as possible, even if it means others go with less....or none.  Greed is a by-product of people feeling disconnected from each other and from society at large.  They come to believe that looking out for oneself is all that matters.  And, greed has a built-in aspect that causes it to just get more and more virulent....until it has the features of a form of insanity.  And, indeed, it is exactly that.  People afflicted with greed, the disease, eventually come to believe that amassing whatever it is they crave--clearly money is the most popular choice--is all that matters.  And, proof that this behavior is insane comes in the realization that they will continue to amass resources...even when it is clear that doing so will result in a situation in which life will cease.

That's right. It's reminiscent of an animal that keeps on eating even though they are already so full that continuing to eat will KILL THEM.  An, animal might do this out of ignorance of consequences.  A human being, however, may well know that the outcome is lethal....but, keep right on stuffing themselves.  It reminds me of a scene in Monty Python's 1983 movie: "The Meaning of Life".  There is a man, Mr. Creosote, who is vastly obese, way beyond morbidity.  He's huge.  And, he keeps on eating, and eating, and eating......and finally he explodes. It's a riotous scene, but it's also uncomfortably gross because the viewer knows he's going to explode and, he just won't slow down.

Well,dear descendants, that is about how we were.  We just refused to stop consuming...everything. Whether it be carbon fuels, crops raised with nasty--i.e. unfriendly to living things--chemicals, over-the-top luxury that re-defined the term, 'decadent.  We wanted it all.  If it strikes you that this entire scenario is saturated with irony, yes, you are absolutely right.  And, most of that is the result of knowing what we were doing was wrong, and choosing to do it anyway, regardless of the consequences.  This is greed in action. This is the human trait of selfishness hard at work destroying any possibility of creating harmony or of transcending challenges by working together for the common good.  All of that goes right out the window when greed comes in the front door.  And..........it did. Hell, we opened the door and invited it in, not the least put-off by the big teeth and leering yellow eyes that should have told us to not let the wolf past the threshold.

Please do not think for a minute that I am arguing that we weren't wholly responsible for our choices.  Oh, no. We did our choosing with our collective eyes wide open.  Well, yes, okay...there were a lot of people who were clueless, but, in some ways, that was a choice too.  Many people at the time I am writing this are refusing to accept that a fact is something that, in order to qualify for the term 'fact', must be TRUE....demonstrably so,  and able to pass any and all tests proving otherwise.  Not anymore.  Now, there are many people....not a majority, but enough to fuck things up for the majority....who have decided that a fact is whatever they make up and want it to be.  Amazing, isn't it?

Think about what it means to leap from a firmly grounded, truth-based reality into a swamp where the 'truth' no longer has any meaning and we're unable to know what is real and what is false.  Reality becomes like a 'hall of mirrors' in an amusement park. Confusion rules the day, and this allows the picaroons to go about their looting and plundering unimpeded.  I have a hunch that you will have read historical accounts of our current president, yes, the one who is such a vivid shade of orange, but, sadly, not as intelligent as a typical orangutan.  If you have read about this sad and despicable man.....assuming that this flight away from factual information didn't take permanent root, leaving you adrift in a sea of "Who Knows?"....then you know that he was a kind of court jester, always making up facts to suit his greedy purposes and to preen his pathetically weak ego.  He became the band-leader as we proceeded to march off down the road to oblivion.

I so wish that I could reverse this communicative process and hear from you.  Did you manage to cobble together a livable society out of the rubble we left you?  I pray for you, even though you are not yet born--far from it--as I write.

I pray that your generation(s) will have not just suffered from the stupidity and greed of ours, but that you will have learned from it, and that you have had the courage to put together a society wherein you care about each other, where the color of a person's skin is irrelevant, and the name of the deity, if any, one prays to is equally unimportant, a society fully aware that the suffering of its least capable and impoverished souls is centrally relevant and that caring for all humans--and other species too--is one of the pillars in creating a society where there is less suffering and more joy.....not just for a debauched elite who want to bathe themselves in endless, degenerate luxuries at any cost, but for EVERYBODY.

Please try to forgive how stupid and selfish we were, and know that it was apparent to many of us even as it was happening.  We have had much struggle and pain here ourselves.  And, despite knowing that we brought it on ourselves....many of us desperately wanted to make changes that would move humanity toward an enlightened society.

Clearly we failed to do that.  And, thus you may understand and accept my apology as above.

I wish upon you the Grace and Intelligence of the Heart necessary to do better than we did.

Posted by Murad Sayen at 5:01 PM No comments: