"The Bluebird Theater" is my most recent painting, just finished.  It is 24 x 36, oil on panel, and is a rendition of a scene that I photographed in Denver Colorado.  The Bluebird is no longer a movie theater, in fact, but a venue where mostly up-and-coming bands and performers are on stage, seven nights a week.

For more than a year I had been casting about looking for the right theater to paint.  I was primarily interested in the lights and lighting effects of a marquee at night, but I also like the feeling of a pool of light that attracts people who come to be entertained.  The shadowy figures in this painting are kids who have come to see a couple of unknown--nationally, at least--rock bands.  The movie title on the marquee is my own.  "Paradise Lost" is the title of an epic poem by John Milton written in the 1660s.  It addresses his despair in a lost revolution, but affirms his faith in humanity.  Max Demian, is the name of a primary character in Hesse's novel, 'Demian'.

I just was not inclined to put the names of two rock bands on this classical marquee.  But, for me, the real challenge and satisfaction of doing this painting is how the lights of the marquee needed to really seem to luminesce, and I am very fond of how the blue light coming from the neon 'Bluebird' is causing the entire top-half of the building to seem almost unreal, kind of ethereal and yet vibrant at the same time. I also found the way that the theater's lights reflect off of the painted lines in the street and the reflections on the car parked down the block to add visual interest.  And, they were fun to paint. 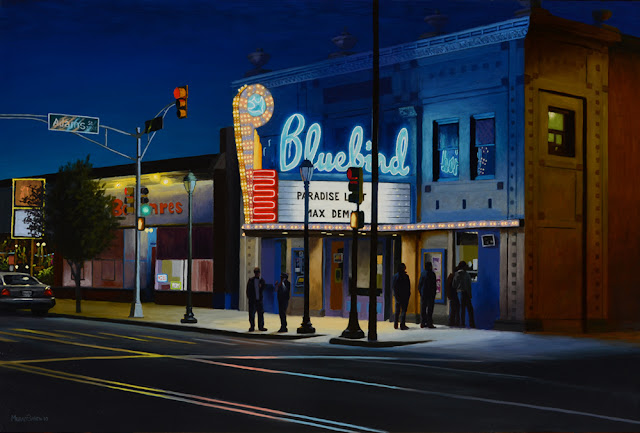 Posted by Murad Sayen at 2:04 PM No comments:

I had not paid attention to the term, "net neutrality" until I read the above linked piece. (click on the header)  Al Franken is a highly literate and astute watchdog for individual rights.  How ironic then that he should be representing the same state of Minnesota that Michelle Bachmann does.  They are such absolute polar opposites that it almost boggles the mind.

But, thank God that Senator Franken is paying attention, because if the sneaky weasels who are about to attempt to pull off a quick one on us succeed, the internet will change fundamentally in its nature and its mission.  Instead of being an open and free venue wherein small entrepreneurs and people who desire to share their opinions--like I do on this blog--have equal opportunity to do so, it will instead become a place where big money and corporate horsepower begin to have more status and much greater power to put their message in your face.  The essential liberty that has characterized the internet--for better and for worse--will be on its way to extinction.

The internet is still a relative adolescent.  It was almost inevitable that the forces of greed would find ways to manipulate the vast power of communication and the nearly infinite information reserves that the internet serves as a gateway for. By inserting themselves at the junctions of how information flows, these masters of manipulation will succeed in influencing not only what we buy, but what we know, what we even believe is going on in the world.  Can you imagine any organization as politically biased and intellectually corrupt as Fox News having the power to determine what goes out over the world-wide-web?  When the little guy is squeezed out because he or she can no longer show up in searches, due to an inability to pony-up the necessary fees or simply because their opinion is divergent, the fundamental nature of everything that the internet represents will be utterly and irrevocably destroyed.

Think about this.  The internet is the greatest leveler of the playing field of democracy, of any form of communication that HAS EVER EXISTED.  Anybody can gain access to it for free, and anybody can use it to communicate their message, however weird, wonderful, inane or ingenious.  It is ALL IN THERE.

Letting this fall under the sway of people who are intent on dominating it for the purposes of political influence or simply the achievement of greedy goals.....is a form of social suicide.  We would just have one more channel on the television is ultimately what it would mean......nothing that could ever serve to preserve and to develop intellectual, social and spiritual goals.

This would be just one more aspect of the Oligarchy of Greed that is already in ascendancy.  God help us if we allow that to happen.
Posted by Murad Sayen at 9:28 PM No comments:

I have spent a lifetime in the shooting sports.  Starting at age 8 and all the way to the present day, I am, simply put, a Marksman, with pistol, shotgun and rifle.  I have a long list of credentials in that regard and a bunch of trophies, but more than that I just love being outdoors and participating in the shooting sports in all their many forms.

I have been keeping up with the mini-series on TLC channel, "Sarah Palin's Alaska", and it is more, much more, revealing than I would guess she is aware.  For example: here's what I saw when the great Sarah of Wasilla sallied forth on a caribou hunt:  She wasn't either allowed, expected or willing to carry her own rifle. In fact, it wasn't hers at all, but one chosen by her father from his battery...picked for its lack of recoil, according to him.  I would guess it was something like a .243 Winchester. Palin Sr. referred to it rather disdainfully as a 'varmint rifle'.  Neither was she expected to load or operate the bolt-action on this rifle. It was the kind of thing you might see when a kid is hunting with a parent for the first time.  But, apparently, Palin Sr. has been taking Sarah hunting since childhood....so, is that perhaps why he still treats her as if she were a ten-year old?

So, finally, a caribou presents itself on the second day of the hunt.....and the moment of truth is upon her.  Sarah squints into the scope and squeezes off a shot.  Nothing happens, the caribou stands there.  So, her father reaches over and operates the bolt-action and Annie Oakley squeezes off a second shot......caribou stares in disbelief.  She misses four times before it dawned on anybody that the rifle wasn't properly zeroed-in.  The scope must have taken a knock during the travels to the camp....but any responsible and knowledgeable sports(wo)man knows that the first thing you do on arrival in camp, certainly before heading out, is to fire a few shots to verify the zero on your rifle.  Nah, not the Palins.

Then her friend, Becker, hands her his rifle with the warning,"...Careful, this one kicks", and she finally shoots the by now bored caribou, who had apparently decided that its fate could only be fulfilled by being a victim of the storied huntress who had traveled so far to kill it.

The whole business was just silly.  This woman--despite all her claims to outdoor expertise--violated a primary rule of hunting: be sure of your shot.  By not knowing if the rifle was properly zeroed, she turned the whole thing into a Keystone Cops movie.  When she got home and was showing off the meat and antlers to her family with great pride, her smallest daughter, Piper, was singularly unimpressed and when Sarah asked if she'd like to have the antlers on the wall in her bedroom, I believe I heard Piper observe that her mommy had shot a very small caribou.

If the goal of this mini-series is to impress all of us who love the outdoors that Sarah Palin is one of us, I've got some bad news for you, Mark Burnett.  It ain't workin'.

Posted by Murad Sayen at 4:26 PM No comments: 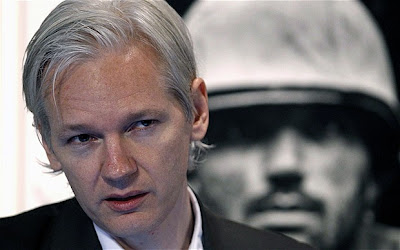 If someone dumped a print out of all the documents that Wikileaks just dumped into the world media channels in your garage, it would require a fork-lift to move them.  I say 'garage' because I am doubtful there would be room in your office or home.

Jon Stewart put it in perspective in terms of what this mountain of material really reveals: not much, if anything.  If Assange's motivation was to 'embarrass' us as a nation on the world stage, he has failed miserably.  Here's the thing:  he would have to go light years beyond just revealing some crass and candid statements made by our diplomatic corps if he wants to even come close to what we do on our own to make us look fat, stupid, greedy and 'ugly' in the eyes of the rest of the world.  Anybody who spends time outside of the U.S. these days can tell you that the rosy view of Americans that persisted after WWII....is long gone.  We have acted out of such obvious self-interest with such callous disregard for both the world community of nations and the environment, that we are now held almost universally in low regard.  Hillary Clinton apologized to one of her secretary of state 'counterparts' from another country, only to be told, essentially, "Not a problem. You should hear what we say about YOU."

Chris Matthews, of Hardball on MSNBC, said, "But people are still trying to get into this country, right."  Right, because they live in horrendous circumstances in places like Honduras and Mexico.  I would be wading the river and climbing the fence too if I lived under those conditions.  That doesn't change how the rest of especially the developed world sees us, warts and all. To this day, I wince when I am reminded that we refused to sign the Kyoto Accords. We were telling the world, straight-up, we're going to pollute all we want to, to hell with the environment.  So, is it any wonder how we got here?

Much of what Assange is motivated by is a deep anger towards the United States.  In one interview I saw it was impossible to not know that this is a seriously disturbed dude.  His mannerisms, his tone....hell, just the look in his eyes when he spoke about why he wants to monkey wrench America....all were clear signals of his mental/emotional state.....and it made my skin crawl.  He is now on the run, accused of committing rape and living a shadow-life as he flees from international law enforcement.  He had better hope they find him before the CIA does.

But, my real point here is this: despite how deranged Assange may be, regardless of his burning desire to 'hurt' us....maybe it is just possible that he's done us a favor in essence, by holding up a mirror and saying, "Do you see how you look to the rest of us?"

So, maybe it is time we stopped looking in our own Magic Mirror and asking, "Mirror, mirror on the wall......", and stop discounting others' opinions and begin asking ourselves what we need to do to find our way back to being the good example and the beacon of freedom that we once were in the rest of the world's eyes.
Posted by Murad Sayen at 9:19 AM No comments: