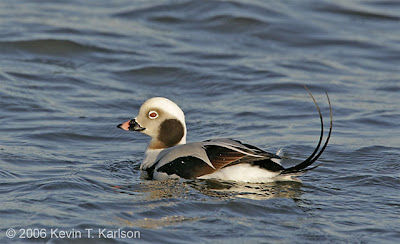 I have been a passionate, if not methodical, birdwatcher since childhood. This very likely is an inherited trait, because my father and his father before him have all been likewise fascinated by our feathered friends.

I recall my father with his arm and forefinger extended, excitedly whispering, "Look, an Indigo Bunting!", as if he'd just spotted an African lion in the New Jersey woods.  My grandfather had a collection of birds' eggs so exquisite that it was given to a university after his passing in the early 80s.  But, among all the vast variety of beautiful birds that are around us....ducks have always been special some how.  If asked why that is true for me, I usually explain that they are rather the ne plus ultra of the bird world: they are among the strongest fliers (Blue-winged Teal can do 90 mph in level flight), they swim, they have an astonishing array of plumage designs.....and they 'QUACK', at least many of them do. The sound of a flock of ducks at rest is enough to make me smile: "...quack, quack, quaaaaack" like a bunch of seniors at a bingo game. 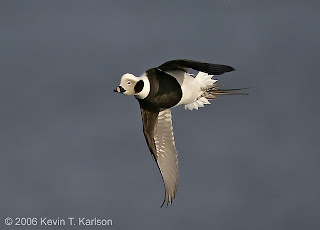 There are, however, a few ducks that I consider to be even more extraordinary than their peers. One is the Wood Duck, with plumage so stunning that it hardly seems possible that it's real.  Another is the Harlequin, also an absolute masterpiece of duck-design.  But, yesterday, I saw a small flock of a species that I have seen only twice in the previous 33 years: the Old Squaw.  Apparently, however, some birders in positions of influence felt that name was too politically incorrect and offensive to persist, so the Old Squaw has been re-named the Long-tailed Duck.  Okay, I get it.  Birders are not the kind of people who want to offend others.  Fine, but, I wish they were also a little more imaginative and creative. I mean, "Long-tailed", just doesn't sound like much, no big deal.  And then you see the actual duck!!  Designed in perfectly harmonious shades of grey and brown, with white and black accents....and with a jaunty curled-up tail of pin-feathers that looks like they belong on a British royal's hat. Surely, such a magnificent bird deserves a more august, more inspiring name than one that simply states the obvious. Maybe such beauty is just that which is beyond description....so, they just settled for gross under-statement.

I do not really care.  But, I can tell you that when my binos took in the sight of eight of these stunning creatures bobbing gently just off the rocks of Portland Head, I felt a rush of joy that only the sheer power of Beauty, yes, with a capital 'B', can bring about. 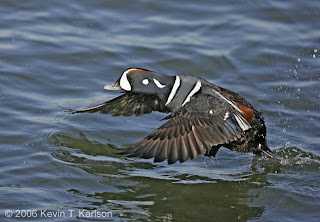 And, here's a Harlequin...just so you can see for yourself what makes me stretch for superlative adjectives when I try to describe such amazing creatures.

My thanks to Kevin T. Karlson, who is one of the best duck photographers out there, in Cape May NJ.
Posted by Murad Sayen at 8:57 AM No comments:

This is addressed to the people who think they should be able to share their opinion as if it were a muffled voice, coming from behind a curtain. I am only rarely--as in once to date--willing to publish a comment that is being offered by a person who is either too scared or unwilling to assume responsibility for what they are saying.
I did post one such comment recently because the person wanted to share a resource that could be of value to readers.
For the most part, however, if you can't stand behind what you are saying, it probably isn't worth saying.
One such comment came just the other day, in the form of a rather pointed question: Are you saying that the hordes of people won't be coming out of the cities looking for what we have? That's a paraphrase, but the essence is accurate.
Answer: No. But, the question in response to this possibility is, how are we going to behave as a nation of people? If we are now working on mentally preparing ourselves to regard people who have been caught-up in a disaster as 'zombies', i.e. 'other', and are girding our loins to be able to shoot large numbers of them, thereby increasing the chances of our own survival...then we are a nation of people who have lost our way.
There is an alternative, but the people who are getting ready for the Great Zombie Invasion don't want to hear about it. Last summer in Vermont, as a result of the hurricane, turned tropical storm, that came up the east coast, entire towns were flooded and some were completely cut-off as bridges were destroyed. It was a dire situation. No, it wasn't Katrina, but, for the people caught up in it, it was every bit as serious. And, in their intrepid yankee way, Vermonters responded to it by pulling together. I saw one t-v interview with a woman who had lost absolutely everything. Her most notable comment was: "We're going to be okay because we have each other."
If indeed we are, at some point, going to have a situation in which very large numbers of people are put at risk, if we eventually do face a breakdown of the logistical supply system, and people are going to go hungry, we will be forced to decide WHO WE REALLY ARE. And, if the answer to that is that we're not much better than a pack of wild animals who are willing to kill our fellow Americans...all the while pretending that they are not really even human beings....then we are also going to be confronted with the realization that we're a far cry from being the nation of courageous, hard-working, inventive, NOBLE and compassionate people that we have been imagining we are all these generations.
We will be just one step this side of being inhuman ourselves...and, at this moment, I just am not at all sure that I would be willing to struggle to survive so that I can live in such a place. There was a time when I felt en-nobled by being an American. I was willing to die for this country and the ideals it represents, and I put my ass on the line to back that sentiment up: three years in the infantry.
Now, I am looking around and I am hearing the din of selfish people figuring out how to be selfish in ways that are positively nightmarish, not merely lacking in compassion or a willingness to sacrifice for others, but so utterly devoid of humanism that embracing becoming a human predator is now somehow justified.
Sooner or later.....we WILL BE TESTED. And, if this is our response, if survival depends on being the baddest s.o.b., with a willingness to kill anybody we feel threatened by, we will have become that which we have traditionally eschewed and rejected: a nation of hateful and selfish people who care only about our own well-being.
Sucks, if you ask me.
Posted by Murad Sayen at 8:06 AM No comments:

Big Oil's to die for profits......but, you're the one doing the dying 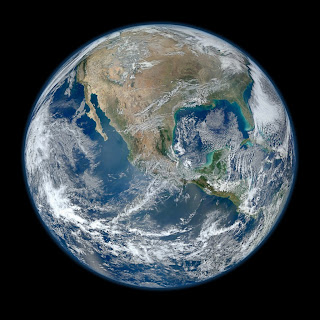 If you click on the above title you will be taken to an article by Bill McKibben--originally posted on TomDispatch, now re-presented on Salon.com--that spells out in very accessible terms the roots of climate change denial and why Big Oil is funding it so lavishly.
The future bottom-line is so potentially vast for them and their businesses are already so amazingly profitable that they are willing to destroy life as we know it on this planet. This is not radical rhetoric; it's the simple truth. Greed is perhaps the most powerful of all human motivators, and people--much less countries and corporations--have always been willing to commit murder when the possibility of financial gain is sufficiently tempting.
In this case it is the promise of profits that are wildly beyond most peoples' ability to even conceive of how much money is at stake. At present the big oil companies are already posting record profits. They are awash in money and have a vision that this will become ever more vast as time passes and the demand for oil continues to grow, even as the overall supply fades. McKibben points out that Big Oil is spending hundreds of millions of dollars to support the notion that global climate change is just a hoax...brought about by such kings of sleaze as THE INTERNATIONAL SCIENCE COMMUNITY. Mountains of undeniable data have been acumulated proving beyond any doubt whatsoever that climate change is not merely real, but that if it continues unabated....it will be a disaster of stunning, unimaginable proportions. But, that is anathema to Big Oil's plans to reap untold trillions of dollars as we move into the future. It seems oddly surreal to me, that they are so devoted to this financial goal that they have voluntarily blinded themselves to the fact that they will not have a future anymore than the rest of us if the plan to pump gigatons of carbon into the atmosphere continues as planned.
PLEASE READ THE ARTICLE.
BTW: Rick Santorum is now emerging as the latest Republican with 'The Big Mo" behind him. He has bragged that he's wiser and more qualified to lead this country because, after all, he spotted the global climate change hoax before Romney or any of the others. Wow!
Posted by Murad Sayen at 10:59 AM 1 comment:

More on the zombie invasion... 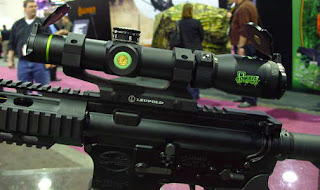 As if it weren't enough that a major ammo maker is producing Zombie-Max ammunition....America's most respected maker of rifle-scopes, Leupold, is now offering a new scope, made especially for killing the already dead, formerly humans who are headed your way.
This little cutie--listing for almost $700--is no toy either. It's festooned with appointments in zombie green and has a zombie brain on the inside of one of the scope caps and a zombie head on the other end. It seems that the industry is having a ball marketing zombie items, all the while knowing full well that it is deadly serious underneath all the joking about mythical comic figures. I have no doubt that the sly marketing types who sit around conference tables in companies like Leupold and Hornady think the whole business is just another way to sell more products to shooters.
I also know that the target audience (okay, you caught me....it's a really bad pun) knows exactly what the 'zombie invasion' is....and that pretend ammo, and toy rifles are not going to be sufficient to repel it. Click on the title above to see a short video on a company rep at an industry show introducing this product.
Posted by Murad Sayen at 8:34 AM No comments: