In his closing remarks the other night, Cenk Uygur--the liberal host on MSNBC--went into a lengthy monologue on the idea that the Japanese people are "Heroes of Humanity".  I watched and was amazed as he listed their many courageous and noble attributes in response to the tsunami/quake and nuclear disaster.  Yes, there have been many stories that support this viewpoint.  Yes,  it has been a terrible blow for them, on so many levels.  Yes, I feel their pain as they struggle to recover and to even find the bodies of almost 10,000 missing souls.

A person would have to have a heart of stone to not be touched by some of the anecdotes that are coming out of northern Japan.  But, before I buy into Uygur's bestowal of the lofty title of 'Heroes of Humanity', I have to pause.  These are citizens of the same country that wanted to build a highway over the Andes in order to loot the Amazon basin of its last tropical hardwood lumber, the same folks who paint 'RESEARCH' on the side of a multi-million dollar new factory ship designed to process whale meat harvested by a fleet of killer ships...one of which tried to kill members of the Sea Shepherd Society by running down their vessel.

The Japanese treated their prisoners of war so badly in WWII that almost one third of them died (while approximately 1% of those held by the Nazis died, for comparison). Japanese soldiers committed endless mayhem on the Chinese population--including the infamous Rape of Nanking, footage of which is almost impossible to see without feeling ill--and the Koreans, and the Filipinos were also the recipients of savage brutality at the hands of Japanese troops, slaughtered wholesale for no other reason than various Japanese commanders wanted it so. None of these crimes against humanity were ever apologized for after the war.  To the Japanese, it was as if they never happened. Throughout history, Japan has demonstrated a tendency towards viciousness and brutality, on a level that has equals only among such figures as Ghengis Khan, Ivan the Terrible, Adolph Hitler and Joseph Stalin. One only needs to study Samurai Japan to see what a truly violent society was like. What we have in this country at present doesn't even begin to approach what life was like in Japan during those centuries.  A peasant could have his head lopped-off by a passing Samurai for simply being perceived as not having bowed low enough to the ground.

Their complete disdain for the environment and all species with which they interact was made crystal clear in the recent award-winning documentary, 'The Cove'.  If you have not seen this heart-rending film, do so, but with the caveat that it will leave you almost certainly enraged that any human beings could be so cruel and callous.  Yes, it so happens that I--and a whole lot of other people--love dolphins beyond all reason.  I have had enough personal experience of them to know that they deserve to be treated with respect and kindness, that they are creatures who we may well one day realize are actually superior to humans in a variety of ways.  At the very least, we should not regard them as swimming lumps of meat, there for the harvesting as we wish.

So, Cenk, let's back down on the wildly admiring rhetoric and pause to remember that most things have multiple aspects and that nothing occurs in a vacuum.  What has happened in Japan is sad beyond measure, but it is also tinged with a feeling of reaping what one has sown.  And, that is perhaps the biggest lesson that we can take away from this entire situation: what goes around really does come around. 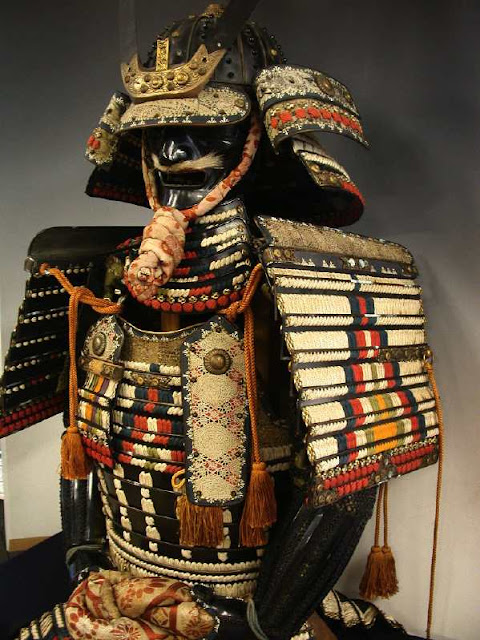 Ghost Dogs of the Navajo

Shortly before Christmas my son, Sam--now a veteran and about to graduate from the University of Maine with a degree in mechanical engineering--said to me that he wanted to break our giving pattern and that he was giving me a trip to the southwest.  He is an avid photographer and has a very fine eye, along with a longstanding love of 'red rock' country.  So, last week we flew to Las Vegas, rented a car, and headed out into the wilds of southern Utah. 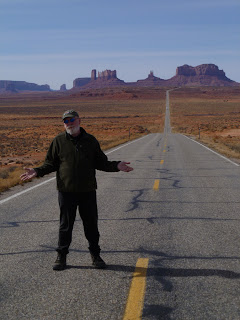 Towards the end of our week of rambling around some of the most magnificent scenery on the planet, we found ourselves in Tuba City AZ, after a day of being at the Grand Canyon.  At a gas station near our motel about five dogs were laying in the pool of light by the gas pumps.  We had also encountered such dogs in Kayenta, near Monument Valley, and we knew that they are on their own.  At our first such encounter--in the parking lot of a 'Mickey D's' in Kayenta--Sam saw a dog and wondered aloud who he belonged to.  It soon became clear that this dog--and many others like him-- belonged to no one and was working the restaurant parking-lot for hand-outs.

In Monument Valley, as we drove the circuitous dirt road around the gigantic mesas, we met a small pair of yellow dogs, who were also on their own.  But, these dogs were a little different.  Their fur was very coarse, like that of some terrier breeds, and their faces were fox/dingo like, very pointy with keen slanted eyes.  They sized up each passer-by, approached as indicated, and were also making a living off of hand-outs, but as we observed them it became apparent that they were truly 'wild'.  When we were pulling out, they raced up over a small rise, apparently headed back towards their den.  My sense is that they were part of a fully adapted feral population of such dogs.  They are so well acclimated that they can survive larger predators, and severe winters out there, although I can't imagine it's easy. 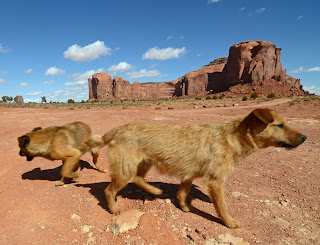 In our days on the Navajo Nation's lands we saw many people who are struggling to get by.  We drove past one fellow who was hunkered down on the edge of a cattle guard, twenty yards from the roadway....five miles from town...with his head propped in his hands......just sitting there.  The sight of him gave me an instant pang of sadness.  He looked so beaten down, so lost, so depressed....and he became a symbol in my mind for all the other people we saw who also seemed to be living with a dark cloud over them.  Sam and I had long discussions about this apparent state of affairs; we asked what our role as a society was in this.  We had to wonder whose responsibility it is that life apparently sucks so badly for so many people.  Neither of us could escape the feeling that beyond a certain point this is something that is self-propagating....but that nobody can really force victim-hood on a person or people who does not somehow submit to it.   Yes, of course, it has inertia, an undeniable momentum that propels a young Navajo man or woman in that direction.  But, it was also seemingly clear to us, as outside observers, that massive government well-fare--in a myriad readily apparent forms--has a severe downside to it, perhaps even inflicting as much damage as it does good.  It made me wonder if anybody has really studied the long-term effects of the existing programs.  And,  it was also strikingly self-evident that ALCOHOL continues to play a central role in empowering the slide towards helplessness and depression for far too many Native Americans.

Sam attended Ft. Lewis College his freshman year, in Durango Colorado.  He went there because he loves that area, and Ft. Lewis was a dominant competitor in mountain-bike NCAA racing.  Ft. Lewis is part of the Colorado state university system, and it is also a 'land grant' school that is charged with accepting all Native American applicants.  So, a steady stream of them show up for freshman year...and the vast majority of them find the freedom and the opportunity to party are just too tempting...and drop out after a semester or two.  Colorado is offering these kids a college degree for free...and most of them just go and party, then drop-out.  Why?

The motel we stayed at in Tuba City belongs to the Navajo Nation.  It was the lousiest one we found by a huge margin, and 50% more expensive.  The 'heat' was a milk-house heater that you were expected to plug into a wall-socket and was so noisy that we went without it.  The entire establishment was beset by an atmosphere of, "...hey, we really just don't give a shit"...and even the parking-lot was so full of big potholes that it looked like the surface of the moon.

In the end, however, it was the invisible, un-cared for, struggling mutts of the Navajo territory that showed some real resilience, perseverance, toughness and a desire to live. But, then, I know this about dogs.  They are always willing to take life as it comes, work with what is at hand, deal with adversity in a way that is both courageous and dignified....and muddle on through.  It felt like far too many of the Navajo people have still not yet learned this very basic, yet critical skill-set, from the very creatures that wander in their midst. 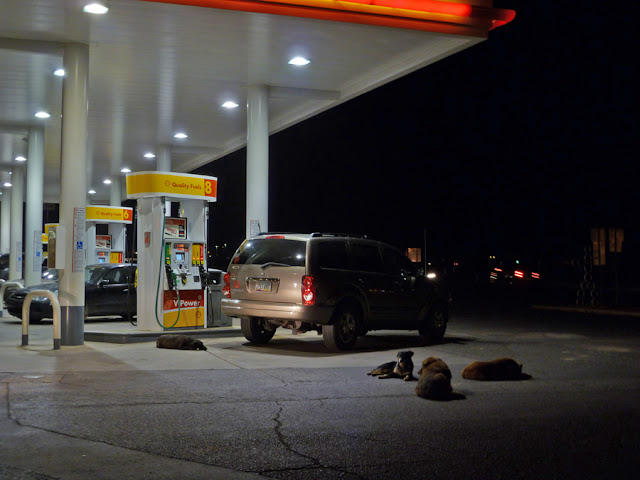 Posted by Murad Sayen at 2:03 PM No comments: