By now, in the ongoing debate over guns in America, it is beginning to be apparent that the conservative and liberal viewpoints are in such extreme opposition that any kind of agreement on what laws will be made is unlikely, perhaps impossible.

But, there is an area of overlap.  Both sides seem clear about the fact that we need to keep guns out of the hands of convicted felons, and the mentally unstable who could be dangerous.  It's just so utterly obvious that for either of these groups to have access to firearms is going to lead to more crime and mayhem.  At least we agree on this one point, although the far extreme right and left will remain stuck in their positions of supporting 'no gun laws whatsoever', and 'confiscate all guns'.  They are both unrealistic and just plain stupid.

Speaking of stupid, however, there is a third category of people who should not have access to firearms and they popped-up in the news just the other day:  people who are just too g-d dumb to handle a gun safely.  At a gun show in NC, a man brought a shotgun in a case, intending to sell it privately at the show.  At the table where all weapons are to be checked and rendered 'clear', he managed to discharge the shotgun as it was apparently being removed from the case.  He's the type of person I am referring to.

This was not the only such incident to marr, "Gun Appreciation Day" nationwide.  A man shot himself in the hand loading his .45 at another gun show, and two other equally inexcusable breeches of common sense, gun handling protocol and basic human intelligence happened.  In each case, people were needlessly yet unintentionally wounded.  It boggles the mind.

Too many years ago, when I was an EMT on our local rescue squad, we responded to a call in which another such fool had pulled a deer-rifle out from under his mattress, grasping it by the barrel, and shooting himself in the groin.  Clearly, he had stored the rifle there in a loaded condition and with a round in the chamber.....ready to fire.  It was one of the bloodiest scenes our squad ever encountered, but the fool lived.

The point is: stories of this kind of massive stupidity are all too common.  It's not that there are too many guns in the country, but that there are far too many people who do not exercise even a tiny modicum of common sense in how they use, handle and store them.  Were I so inclined, I could write a grand tome describing such instances....and I wouldn't even have to draw on incidents from outside of my own state.

It has been my contention, indeed, my hope, that the 'dumbing' of America has just about culminated, that it will not continue much further lest we become a nation of Alfred E. Neumans.  But, the fact is, there is already a vast host of people who do stupid things as a matter of routine.

Here in Maine we have a recitation of their antics on the local news every evening.  They drive their snow-machines on lakes with large sections of open water, and thereby drown.  They fly down the country roads in their vehicles without seat-belts on, and are inevitably flung from said vehicles, hit solid objects....like roads and trees....and die.  They ride around on Harleys without exhaust mufflers, frequently bouncing their heads off roads and cars and become broccoli.  They drink heavily and then amuse themselves by undertaking activities in which having at least some bodily awareness would seem necessary....and they die.  But....there are still plenty of them left to carry on the grand tradition of Social Darwinism.  We seem to have an inexhaustible reservoir of idiots.

So, all you lawmakers out there who are clamoring to do SOMETHING, hell, ANYTHING about our gun rights....how 'bout figuring out how to keep guns out of the hands of idiots? 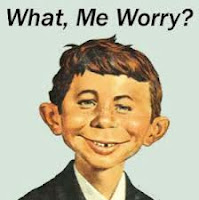