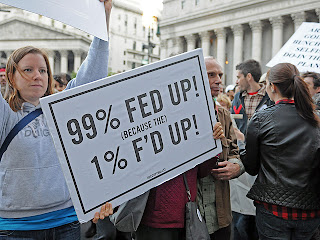 ONE: A tiny fraction of our population owns and controls a vastly disproportionate amount of the total wealth in this country...and globally.

TWO: They have gained this wealth not by productive means, nor by making any beneficial contribution to our society, but by learning to 'game' the financial system through immoral means and strategies that have wrecked havoc on the world economy and inestimable pain on the population at large.

THREE: They are using their massive financial power to buy influence and to control the political balance in order to manipulate the democratic system for their own purposes, rendering it a sham democracy.

FOUR: Their concern for the welfare of the country and population at large is only that it be maintained in a passive state so that they can continue to plunder the wealth of the middle and working classes.

FIVE: The pain and suffering caused by loss of homes, loss of employment and loss of the means to thrive on all levels....is not their concern, DESPITE THE FACT THAT THEY HAVE CAUSED IT. Compassion is not a value they hold or respect, on any level. There is no evidence that they feel any responsibility--nor even a shred of regret-- for the economic devastation they have caused.

SIX: Fairness, any concept of what is 'just', and any idea that a society is only as developed as its most disadvantaged segments....are considerations only for the weak. The strong do not need to consider anything but their own ascendency. The weak are destined to suffer. This is the "...sucks to be you" doctrine.

SEVEN: The looter elite consider their ability to manipulate the financial system no different than their ability to control the political system. Both are the privilege of the strong and the powerful. Democracy is not an ideal, but simply a system by which the vast majority will be controlled and placated...so they can be productive and be taken advantage of.

EIGHT: By owning the means of controlling the political system, the looter elite also holds the means of directing power against their opponents. Not only do the politicians work for them, so too the police, even the military and a powerful propaganda machine, which assures their ability to continue looting and to put down all significant opposition...with violence when necessary.

NINE: The compensation of executives is vastly out of the range of normal compensation for executives around the rest of the world, sitting at approximately 450 to 1. In other words a CEO is being typically paid FOUR HUNDRED AND FIFTY TIMES AS MUCH AS ONE OF HIS EMPLOYEES. This is an historical anomaly and has no precedent in modern times.

If you do not believe that all of the above statements are true.....you have been manipulated too. Look around you; this is exactly what is happening, and the next time you hear a bought and paid for pundit or politician say that the 99% doesn't know what it is pissed-off about, or what it wants......come back and read this list.
Posted by Murad Sayen at 8:30 AM 1 comment:

When I got out of the army in 1967, I began matriculating at The Pennsylvania State University that fall. I was delighted. My family's males had attended Princeton for generations, and I knew that my father was disappointed that I would not even apply. Having grown-up in Princeton, the town, I was intimately familiar with the halls of ivy, had haunted the campus as a 'townie' as a kid on my bicycle, been to countless Tiger football games and lived in a house where orange and black were even the color scheme for a bathroom. (Seems like a recipe for hemorrhoids, in retrospect.)

So, when it came time to apply to schools I already knew that Princeton and its endemic elitism was not on the list. As it turned out, I applied only to one college and was accepted. When I arrived at the Schuylkill Haven branch campus, I was not at all overwhelmed by either the size of it or the demands of it in a social sense. In fact, it felt like a good fit; I felt as if I had come home and knew it was where I belonged. After three quarters, I transferred to the main campus in State College, and that was an easy transition too. I relished having a course catalog the size of a small city's phone book. And, after three years in the infantry, I was dedicated to the idea of taking courses I wanted to take because I was excited about them, instead of taking them because it would lead to a career field. I studied art, in one medium or another, for my entire undergraduate time. I ended-up majoring in philosophy...not because I was fascinated by the incoherent blather of dead Germans trying to explain life by looking at it through the ponderous power of their intellects, but because I met a professor who understood that I was in search of meaning in my own life. And, this, he well knew, would not come from traditional studies, but through widely varied investigations of people like Eric Fromm--a former stevedore turned philosopher--who were devoted to the idea that philosophy needed to be, above all else, RELEVANT.

Under the kind tutelage of Dr. Ernst Hans Freund--a professor emeritus on the verge of retirement, who had as a young man escaped Nazi Germany and the death camps, where he would have ended-up due to being a Quaker--I read whatever Dr. Freund suggested as a likely place to find answers, and I met with him in his office once a week and supported what I had written in response to the most recent readings. It was a higher education in the true sense of searching for meaning and had a depth that just sopping up intellectual arguments and regurgitating salient aspects of them on exams could never touch. All the years since those days of wonder and introspection I have remained deeply grateful to Dr. Freund...and to Penn State for having the wisdom to give this jewel of a man a place from which to shine.

So, when I read the headlines and subsequent press about the scandal that has now devastated the university I felt sad on a very personal level....sad that something precious has been sullied, sad that there are victims of despicable predations, sad that what once seemed like a bastion of learning, both moral and academic, has now been damaged so severely that it will likely take at least a generation to repair it...if that is even possible.

As an undergrad I photographed Penn State football from the sidelines. I watched Joe Paterno in action. It was 1968 and he was yet to become the iconic JoPa, but it was apparent that he was a skilled and caring coach. I felt great pride that his players would receive an education rather than be scooted through a 'phys ed' program that would leave them still semi-literate as has been so often the case at other ultra-competitive universities. Football is important at Penn State, but Joe Paterno never let it become so blown out of perspective that his players were merely being used....often used up.

Apparently, somewhere along the path between then and now, however, something changed. Footbball became God at PSU, and the welfare of a ten year-old child would be considered as less important than a 'reputation' to protect. How this happened and what the mechanisms were that encouraged this descent into turpitude will be much studied and dissected in the next few years. The university is already sending out e-mail to alums saying, essentially, don't worry, we'll bounce back.

But, I will never again look up at the diploma hanging on the wall a few feet from where I am writing this and have quite the same feeling of pride that I did until just a few days ago. Honor is dying in this country. It has a few bastions where it is holding on for dear life...but, it's critically endangered all the same. And, another one of those bastions of Honor just crashed and burned.

You can put the crystal goblet back together...but, it will always have cracks.
Posted by Murad Sayen at 4:17 PM No comments: 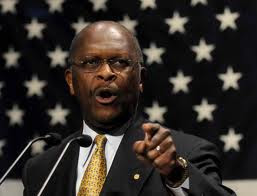 Herman Caine is fed-up with the 'nit picky' media. He's sick and tired of being asked about this sexual harassment non-issue. Move on. Let's get 'back on message'. He's dismissive to reporters who dare to raise it once again. He's just plain sick of it. But, what he's not getting is that it isn't going to go away just because he's ready for it to.

The fact is, if you are running for the office of President of the United States, you need to demonstrate that you have a lack of character issues that might prove deleterious to your ability to govern. If you are unable to do this, people are going to look elsewhere. We've pretty much had it up to here with politicians who suddenly reveal that they are sleazeball pieces of crap. Did I put that too mildly? We're sick of idiots and assholes who think they should hold public office. And, I believe we are about to enter a new period of moving towards sending same back to wherever they came from. Without stating it in a position paper, that is one of the underlying messages of the Occupy Movement: time to stop letting self-interested and greedy business and political figures run the show. Time to 'upgrade'....because it's just not working for more and more people.

So, Herman, if you are listening, you need to stop pushing back at the media, answer all the questions until we are either satisfied that you have been wronged or that you are a sleazeball who hits on women in the workplace. Claiming that the media want to destroy you, that YOU are the victim here, that all the allegations are false, that you can't remember....none of that is going to serve any purpose in convincing the voters who might consider you as a candidate that you are worthy of the office. You need to man-up and do whatever you must to set the doubts to rest. Anything short of that is just playing dodge ball.

But, all of this is raising another even more critical issue: what kind of leader would you be? Your method of pushing away criticism, your desire to ignore your detractors, to deny responsibility....all point to a person of arrogance. Herman, you have a great big ego and you are pretty sure that you can use it to accomplish whatever you want. This may be mistaken for spirited truculence on the part of some neo-cons....those who cheer at the thought of people with no insurance dying, and jeer at an active duty soldier who is gay,....you know, the crowd in the Coliseum who roar when a lion tears a slave to pieces, those people....the idiots and nabobs who think we can motor off into the future as if nobody but ourselves exists, who believe that they have theirs, and it sucks to be you, the Ayn Rand crowd.

Meanwhile, back in the Human Race, we are getting really worried about where all of this is headed. The fact that you, Herman, are the leading GOP candidate in polls, despite your possible malfeasance in the past, despite your arrogant and dismissive attitude.......now that is troubling.
Posted by Murad Sayen at 3:55 PM No comments: