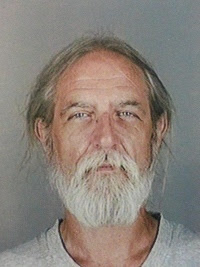 This is a mug-shot of William Spengler, the man who set fire to his house and a vehicle in order to set a trap that would bring firefighters to the scene in Webster NY....so he could, in his own words, (via a note he left), "Do what I like doing best, killing people."

This same monstrous creature beat his 92 y.o. grandmother to death with a hammer in 1980, and he served a long prison term as a result....but, apparently not long enough.  We will learn in the next few weeks how it was that a convicted felon obtained at least 3 guns, one of which was the same type of weapon used in Newtown, and in Aurora by the mass-killers in those tragedies.

What I want to know is this: What did his neighbors know about him?  Did they not have a clue that he was a convicted murderer, that he was in a mental state leading to more murderous behavior?

For God's sake, LOOK AT HIM!!!  Does this look like a person that you would want in your neighborhood, someone you would trust to act in a civil and law-biding fashion?  His insanity is written all over his face.  So, why was he not on anybody's law-enforcement radar?  How was he able to buy those weapons....which, it will be noted, he was forbidden to own by New York state law?

So, in the midst of the furious conflict that is already arising about how to control GUNS, what can be done to address this man and those like him?   How do we prevent him from being the living equivalent of a raging beast in our midst?  This is the real question.

I have yet to see a mug-shot of one of these deranged maniacs who looks like anything other than......wait for it......a DERANGED MANIAC.  We have laws specifically put on the books to keep people like this from obtaining the means to commit mayhem.  How can any reasonable person think putting more of the same laws on the books will make any difference whatsoever?

You can direct all the rage you want at the NRA.  You can point your finger at us, carry signs saying we are killers.  But, to any intelligent person, it must eventually become clear that it is people like this man, Spengler, who are the land-mines in the minefield that we walk across every day of our lives.

STOP THE MANIACS!  Somebody tell me how we can do that, and stop wasting time whining about the fact that there are too many guns.  They are simply a fact of life in America, have been since we were colonists....and, ya know what?  That was not a major problem until people began to decide that punishing innocent people for their own pain is okay.

How we got here is a good question.  A better one is now what are we going to do about it?
Posted by Murad Sayen at 5:24 PM No comments:

I was driving home from an appointment when the news came over the radio of the massacre in Newtown CT.  At first, I just could not comprehend the scope of it....but, as it sunk in, tears came and a deep sense of sadness settled into my heart.  We have a grandson just the age of some of the victims, and a son whose first name is shared with another one of them.  These facts just made it that much more clear that this happened to ALL OF US.  Yes, of course, nobody can take on or relieve the grief of those parents who lost children on Friday.  But, unless one's heart is in a state of relative torpor, the impact of these murders is immense.

Adam Lanza, the killer, was, according to all accounts extraordinarily bright, something he appears to share with James Holmes, the Aurora theater killer, and many others who have suddenly decided to inflict monstrous acts of violence on people around them.  In many cases, as in Newtown and Aurora, the killer has not even known the people he attacked. It appears they are just 'targets' for his rage,  symbolic souls that I believe represent all of us to some degree.  In the Newtown rampage, the killer seems to have gone out of his way to choose victims that were innocent and young, surely hoping that this would vastly increase the pain created by his actions.  He was right; it worked.

So, is this the last straw?  Is this event so far beyond the pale that we will finally stop setting aside the question they have all demanded be asked: how do we stop the carnage?  Is this slaughter of innocent young children finally going to force us to recognize that something is dreadfully wrong in our society?  Will we now come to face the terrible fact that we have a society that is somehow causing these human-beings to decide to become monsters?  For surely nobody in their right mind can continue to assume that these are just the appearance of random deviant personalities.  People are raised in families, but also in villages, in tribes, in a society that has both expectations and influences on who they become.

Well, we have pretty much excised the idea of a village or tribe being an extended family. And, with two parent families now on shaky footing, it is becoming apparent that at least some children are growing-up with a proclivity towards deviance.....on a grand scale, not just 'being a little odd'.  How is this happening?  It is way too easy to jump to conclusions; perhaps the best we can do right now is to make a list of factors that seem to be implicated.

I would start with a good hard, side-long look at the fact that so many kids have traded-in such pastimes as 'sand-lot baseball' for sitting in front of a flat-screen playing games like World of Warcraft.  A couple of years ago, I wrote how this 'game' has stolen the normalcy of my grandson, and essentially ruined his life.  I have not changed that opinion, and I ask you to consider how it would be possible for a young and impressionable person to fantasize killing for eight hours a day....and NOT HAVE IT CHANGE THEM PROFOUNDLY.

The 'experts' can opine for the next few decades as to whether or not such violent fantasy games, and equally violent movies, television shows, etc. have egregious effects on developing personalities.  That is what they do: offer opinions, usually in line with some agenda.  I know in the depths of my being that this is a major factor in how young people are learning to see the world around them.

The other element that is implicated...although, yes, there are many and it's not my intent to imply that this is all very clear and simple.....is the growing deficit of COMPASSION.  In many circles now, compassion is regarded as being something for weak-minded people.  I recently saw a group photo of a sorority at my alma mater--dear old and now bedraggled Penn State--of the young women dressed in mock Mexican garb....sombreros, and serapes....holding up signs that said such things as: "We don't cut grass, we smoke it."  WTF?  Apparently, these all white middle-class young women had no clue that this might be both racist and entirely offensive to latinos. Again, wtf?

If you have the eyes to see it, look around you, and notice how the quality of compassion is being trampled in favor of both self-interest, and voluntary self-isolation of groups.  Only when something like Newtown happens do the people who are clinging to their own humanity come forward and remind us that it is PRIMARILY compassion that renders us human.  Without it, we are in danger of falling far short of the ideals that term implies.  Spend some time listening to Rush Limbaugh if you really want to understand the passionate viewpoint of pure selfishness.  He models it as well as anybody out there.

Now a few words for all those whose immediate reaction to this latest atrocity is that we should impose strict gun control laws.  We are a gun-saturated society, have been since our inception.  The true number of guns in America is somewhere in the neighborhood of 350 million, though it might even be as high as half a BILLION.  Unless you want to have a police-state, there is no possible way that we will even reduce that number, much less get rid of them.  Do not waste our time suggesting that we become England, Canada, Japan or name your 'gunless' society.  IT WON'T HAPPEN HERE. There are just too many factors in play that will prevent a return to innocence, a miraculous state of harmlessness.  It's nice to contemplate....but it's a pipe-dream.  Connecticut has some of the strictest gun laws in the U.S.  It made no difference to Adam Lanza.  He was a time-bomb; his mother knew it, and yet, he was able to steal her firearms and commit mayhem.  How do you stop that?  We will never get an explanation from her as to why her guns were not under lock and key.  And, yet, she even warned a baby-sitter to never turn his back on the then 9 y.o. Adam.  WTF.....again.

So, what we must do is learn how to live with guns being available and we need to start learning how to identify high-risk individuals and get help for them.  We can no longer say, "Well, we knew he would do this someday. But, what could we do about it?"  That is now-I fervently hope-
unacceptable.  These shooters have almost unanimously been isolated, rejected, shunned, regarded as 'outsiders' and their intent in planning and executing such monstrous atrocities is to punish us, to make us feel pain in the extreme.  It is the biggest, most powerful way they can conceive of telling us, "FUCK ALL OF YOU."

So, what are we going to do about that?