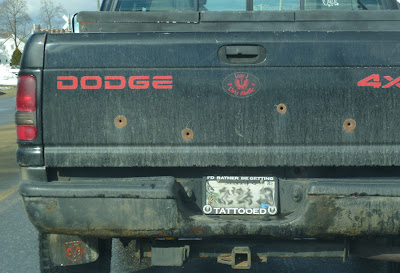 Every once in a while I come across something that just seems like it could never be surpassed.  There just simply is no way to top it.  Well, just the other day I found myself behind a beater of a pick'em-up that made me reach for my camera.  As I crept up on his bumper at a railroad crossing...being careful not to annoy or otherwise piss him off, in view of what I was looking at....I almost could not believe my eyes.

It should be noted that there have been bullet-hole decals and stickers in auto-parts stores for decades. Apparently there is a certain 'je ne sais quoi' about at least having the appearance of being shot at.  I'm not exactly sure why that should be so.  Is it the implication that a jealous husband took a couple of whacks at you as you drove off into the night...his wife's panties flagging from the rear-view mirror?  Is it--even more daring--that the cops were chasing you and, unlike Bonnie and Clyde, you escaped with only a few large caliber perforations in your truck.  BTW: it is always a pick-up truck that has these faux missile impacts.  They even make decals that simulate bullet-holes in glass, with all the little spidering around them.  Pretty cool, huh?

But, as I drifted perilously close to this truck the other day, I could clearly see that these were definitely real bullet-holes, most likely from a .38 caliber or 9mm pistol.  So, I naturally began to wonder how they got there.  Was it indeed an angry rival in a love triangle?  It seemed too far-fetched that he'd be casually riding around town in a truck that had been involved with the discharge of a cop's gun.  I imagined a variety of titillating scenarios, and, then ........ I noticed how evenly spaced the holes were, and how conveniently they missed anything of functional relevance. In fact, they were placed just about where I would have put them if I were putting DECALS on a truck. Suddenly, it occurred to me that the driver of the truck had most likely shot his truck himself.  Maybe he'd had a little too much Allen's Coffee Brandy, the 'anti-freeze' of choice in these parts.  Maybe he took a good hard look at his ride and realized it was a rolling shit-heap. Perhaps one of his buddies remarked how cool the old Dodge Ram would look with some 'gen-u-ine 9mm holes' in it.

Whatever the case, as a piece of art it succeeds magnificently.  It is a statement about rural America, about backwoods Maine, about trucks and the proudly red-neck dudes who own them. It is even a clear-cut statement about the Second Amendment.  It is also extremely capable of evoking a strong reaction from anybody who finds themselves behind this vehicle....as I did.  I mean, do you really want to piss this guy off?

So, real or not, shots fired in anger, or just some coy tinkering around with a pistol, I give this guy good marks for being creative and making a gesture that communicates so effectively....accompanied by the license frame, which lends an even more cryptic and yet authentic feeling, "I'd rather be getting TATOOED".