Click above to read an article that explains why our military establishment, and a whole lot of other militaries, not only accept that global climate change is upon us, but are actively planning measures to prepare for it.

In fact, the people who want us to believe that it isn't happening, that the, by now, mountain of indisputable evidence is to be disbelieved, are those who will continue to profit from continuing to use polluting sources of energy: the oil companies, of course, the pipeline companies, and on and on.  If we suddenly wake-up and start demanding that substantial changes begin to be mandated, profits in predictable sectors will collapse.

So, they would rather see the environment trashed, and our fate sealed....as long as they can continue to loot our money, for now.  It is...as I have previously pointed out, however...a fool's deal.  Rather than a symbiotic relationship to the host economy that provides their opportunity to make trillions....it is a parasitic one, that will eventually kill its host.

But, for some reason that seems unclear at present, this doesn't seem to either occur to them, or play a role in their planning for a sustainable future.  On the rail-line where their train is furiously steaming at thunderous speed...there is nothing but an end of the line, and one helluva train-wreck.  Of course, WE ARE ALL ON THAT TRAIN. They do not give a damn, apparently....and the wheels and rods are churning. 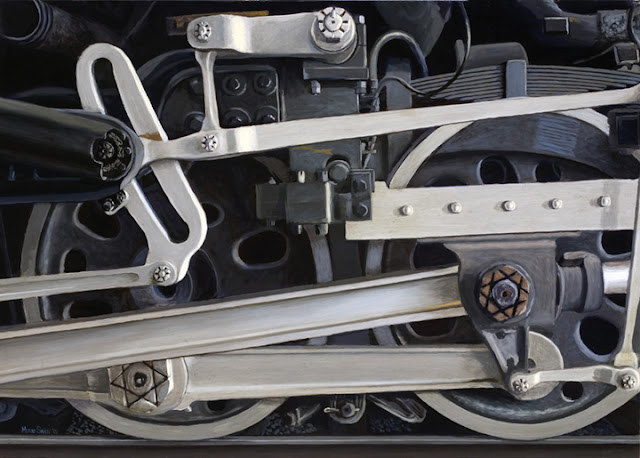 Posted by Murad Sayen at 8:49 AM No comments:

I wrote about Ernest Callenbach here awhile back.  He was the author of "Ecotopia" and then "Ecotopia Emerging" back in the 70s.  Ecotopia was a cult hit with environmentalists at the time, and it was a fictional account of a section of northern California, including San Francisco, that seceded from the United States to form a truly 'green' state. My previous post was a link to an interview with Ernest at 82, and it contained some very apt observations of our current state of affairs. His use of the term, "looter elite" was the first time I encountered it and his flat statement that when the looter elite take over a society it is entering the beginning of its dissolution stage...really pulled me up short.  Truth is a hammer between the eyes sometimes.

Well, Ernest Callenbach died last month.  He knew he was going to, had a terminal diagnosis, and so he began working on his 'Epistle', which he well knew would be his last chance to tell those willing to listen how he saw things coming down here on planet Earth in the early 21st century.

It is a longish piece, but I believe that you will be very glad that you took the time to read it, if you do. Among other things, he gives some very practical advice.  For instance, he notes that people who succeed in remaining hopeful in the face of great challenges do better than those who let hope slip away.  He notes that teamwork in such situations is also a critical divider between those who manage to cope and those who do not. He reminds us that having a few down-to-earth living skills...even those as rudimentary as being able to chop wood safely, or cut a board and hammer nails...are a really good idea.

He looks out across the world through the eyes of an octogenarian who sees with not only clarity born of having lived for eight decades as an observer of humanity and our behavior, but that of a man who is looking around his 'house' for the last time, before he closes the door and walks away....into the adventure that awaits us all.

One of the most cogent observations that stuck with me, was his statement that the process of dramatic change has already begun, that we're already in this process and we might as well accept that and turn to meet it.  He uses the wonderfully effective image of a kayaker whose boat is already in the flume leading to the serious rapids.  And, indeed, I do believe that any intelligent soul who is observing the sum total of events and factors surrounding us.....will come to the exact same conclusion.  Callenbach is even clear about the fact that as a society begins this process of breaking down that its politicians get crazy.  Hello!  Isn't that exactly what we have been watching in this entire primary season....a long, seemingly endless, string of GOP nutjobs, one after the other, each making the previous one look almost sane. 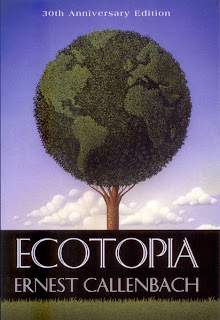 So, click on the "Epistle to the Ecotopians" above and you will go to this rather astonishing outpouring of insight...which was found in his computer after his death.
Posted by Murad Sayen at 9:36 AM No comments: